According to the University of North Carolina's, Documenting the South, John Lawson arrived near Bath, NC on February 24, 1701.1 Shortly after, he built a home near modern day New Bern. Since Mr. Lawson intended to survey the Carolinas, I can only believe he found his way to Lake Mattamuskeet, located just northeast of New Bern, across the Pamlico Sound. In his journal, A New Voyage to Carolina, he makes a reference to "(swans) which come in great Flocks in the Winter".2

It must have been a sight to behold. It is today. This past spring, a member of my hiking group mentioned the snow geese swirling over Mattamuskeet at sunrise and since then, I haven't been able to get that mesmerizing image out of my mind. Eastern NC CarolinasAdventurers discussed a January outing, but I couldn't wait. A week after visiting Green Swamp, my husband and I were standing on the shores of North Carolina's largest natural lake. 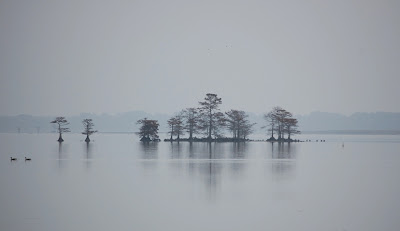 Over five miles wide, like Phelps and Pungo (also located on the Albemarle-Pamlico Peninsula) Lake Mattamuskeet is shallow, on average, just two feet deep.3 According to exploring north carolina's natural areas, it's also the largest Pocosin lake in the southeast United States.4 If you've seen a map of North Carolina, you've seen this lake—it looks like a hole punched out in the bottom of the raggedy middle flap of NC's coast.

Finding Mattamuskeet wasn't hard. We traveled east on Hwy 264 until we reached Hwy 94, then we turned left. Thankfully (for us, not the birds) this highway slices north-south through the center of the lake. We parked on a grassy shoulder a mile down the road and were promptly blown away. Hundreds of brown ducks that we mistook as broken wood or the bases of trees drifted in the shallow water near the shore. Shortly after, they took flight. Beauty makes me weep, and the sight of that large flock flowing gracefully through the sky before us nearly brought me to tears. Only the unequivocal joy surging through me as I watched them and several herons lounging nearby kept the brine at bay.

Fifty-two pictures later, we resumed our journey, and for the next hour we observed and photographed more waterfowl than I've seen at one time: Blue Herons. White Herons. Canada Geese and a long stretch of birds floating a mile down the lake captivated us. We stopped at the observation pier, located near the midpoint of the road, and watched Tundra swans floating past an island of cypress trees, its knobby knees sticking up like a bed of nails. I jerked the car off the side of the road at my husband's command when we spotted herons perched in a tree. We photographed a clutch of herons standing in still waters, their reflections as clear and defined as the birds themselves. We continued on until hunger forced us to find food, then we encountered a problem.

We couldn't find a restaurant.*

Our outdated Garmin led us to a few now-closed spots. Knowing low blood sugar was about to seriously ruin the mood, we drove up Hwy 94 to Columbia where we finally found a place to eat.

Mike's Kitchen is a clean place with a surprising mix of American diner and Asian cuisine. We feasted on tasty grilled chicken sandwiches and much needed tea (I'm a tea addict, have you figure that out yet?) After lunch, we showed the waitress a few of our photos, then, unwilling to miss another chance to see the birds, we drove back to Mattamuskeet.

Mattamuskeet is a must for bird and nature enthusiast, and anyone who loves beauty. And there's more to explore than what we saw. If you view the lake through Google Earth, you can see a jetty or boardwalk jutting into the water on the east side, and several small islands on the west. We'll have another chance, though. We still have that January outing, and I wouldn't be surprised if Kell and I slipped back there in December.

John Lawson gave Carolinians a priceless treasure when he recorded his observations of North Carolina. Some wildlife and plant life listed in his journal are gone now. Fortunately, others are still around. I appreciate the efforts of organizations like the Natural Heritage Program and the Nature Conservancy, which work to protect North Carolina's heritage. I also appreciate the efforts of numerous private individuals including Kelvin Taylor and Rich Stevenson who strive to protect and promote the wonders of North Carolina.

Photos from this journey on our smugmug site at carolinians.smugmug.com

*UPDATE: On a subsequent visit to Mattamuskeet, we found Martelle's Feed House Restaurant, located off Hwy 264 in Englehard, NC, on the northwest side of the lake. They serve good down home cooking with decent prices (at least at the time of this writing.) Hours vary, so call them at 252-925-1799 before you go.

Also, cell reception is poor in that area. We're told US Cellular received the strongest signal so we're plan to purchase a US Cellular prepaid phone to take with us on outings. If you read the New Year's Day blog post, you'll understand why!

Fantastic photos of the lake and wildlife! I especially like the ones of the cypress standing in the water. I enjoy visiting your site every week or so. I grew up in NC and have seen most of the the state from Nags Head to Fontana, but don't remember going to Mattamuskeet.

Hi Lew. Thanks for stopping by! I'm glad to hear you've been enjoying the blog and the photos. A couple of former Carolinians stop by on a regular basis and I'm pleased to give everyone a little slice of home.

There's so much to see and do in these states, I sometimes wonder if we can do everything on our list, much less see it all. We'll certainly try, that's for sure!

One thing about the low country is the amazing numbers and varieties of birds. Some years back, my wife and I went to Huntington Beach State Park in SC after months of torrential rainfall.

The rain had created ponds in places that were normally high and dry. To the point that the ponds were even full of minnows and fish. And the bird life was just off the scale. Every type of water bird and wading bird and hunting bird that you can imagine was in those pools. It was like being transported back in time. It felt like we were watching dinosaurs, at times.

I love the mountains, but when it comes to bird watching, nothing beats the low country.

It's incredible, isn't it? I've never experienced anything like it, and look forward to returning after the snow geese arrive.

Just dittos from me! This is fascinating and so, so beautiful. Wonderful post! Yes, you do give us a slice of home, and it is wonderful. Thanks for what you do!

Thanks, Julie. Believe me, the pleasure's all mine. I'm happy to make the "sacrifice" for y'all :o)

I'm not sure we'll be able to get out this weekend, though. A mix of rain and snow is falling right now. This is the second bout of winter weather we've had in a week. Since the drought is over, we may have even more this year. This will definitely affect our ability to explore. Fortunately, I still have material from trips I haven't yet mentioned, so the blog will go on.

But snow in November, can you believe it?