I live a couple degrees east of North Carolina's Piedmont. Here, waters are black, the land, flat and sandy, and rock outcroppings extinct. Yet, gently rolling hills and an abundance of layered rock and all that entails exists within an hour's drive. Why?

From our visit to Medoc Mountain SP, I learned NC has a "Fall Zone". An area where the hard ground of the Piedmont meets the soft ground of the coastal plain. The eroding of that soft soil around rock formed Medoc Mountain. It also provided members of the CarolinasAdventurers hiking group with some nifty views on our recent outing.

For those living on the eastern edge of the Piedmont, Raven Rock State Park is conveniently located in the little town of Lillington, NC: north of Fayetteville and south of Raleigh. A number of hiking and bridle trails twist around the leafy 4,684 acre park, which is cut in half by the mighty Cape Fear River. That alone would have enticed me had I known about it in advance. As it was, hiking with good company was all the reason we needed to accept the invitation.

We rendezvoused in the parking lot at Raven Rock to begin what was supposed to be the first hike of the day. Our leader chose the Campbell Creek Loop Trail. Not because, at times, it borders the creek, which would have offered some nice views, but because it would lead us to Lanier Falls on the Cape Fear. 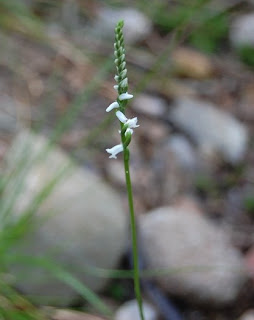 Though flowers aren't in abundance at the moment, what we did spot encouraged us to stop often. The first find of the day was a tiny Lady Tresses orchid. Other finds included Beauty Berries, St. John's Wort, sweet smelling Clematis, seed pods of fading Crane Fly orchids, New York and Cinnamon ferns, wild Muscadine grapes, and the largest variety of fungus I've ever seen, in colors ranging from red to purple.

Plant life wasn't the only thing that caught and kept our attention. We also saw two species of lizards, at least three species of frogs and toads, and one snake, which I didn't know about until after the fact. We also spent a fair amount of time examining rocks, both the quartz, mica, and others types strewn along the trail, and the large layered rocks that formed small caves alongside the creek.

In case you're wondering, there really is a rock called Raven Rock, but it's located where the Raven Rock Loop Trail meets the Cape Fear. That's another trip for another time. Fortunately.

A little more than two and a half miles into the loop, we reached the quarter-mile connector to Lanier Falls. If you're thinking a thirty to fifty foot sheet of water falling into a clear pool, erase that image from your mind. This is more along the lines of what another group member called a shoal--a sandbank or sandbar that makes the water shallow, so says Webster. In this case, a ridge of rocks that stretched across the Cape Fear River.

It may not be a Thompson Falls or a Looking Glass like one would find in western North Carolina, but the sound of rushing water and the sight of those foamy cascades brought a lot of joy to these flatlanders' hearts.

We ate lunch at the falls, though it was difficult considering the number of visitors milling around the small clearing--the only access to the falls in that area. Afterward, we followed Campbell Creek for the return trip, past a forest floor of pine straw in some places, delicate Cinnamon ferns in others. The Cape Fear River is a brownwater system, meaning its headwaters are in the Piedmont or the Blue Ridge Mountains*. The creek is also brownwater, and though muddy where it meets the Cape Fear, portions of the shallow stream along the trail were so clear, we could see pebbles and fish on the sandy bottom. 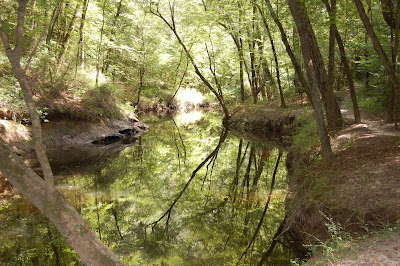 Nearly six hours after leaving the parking lot, we arrived at our cars and immediately began to store our equipment. What? Pass up on the chance to hike another trail? The humidity was high that day, and after a five and a half mile hike, I didn't have the fortitude to go on despite the fact I drank one bottle of water and one of Gatorade. It just wasn't enough. But we'll return. Raven Rock has several trails we still need to explore.

If you're not in the mood for a hike, try camping, canoeing, horseback riding, picnicking or fishing. Raven Rock has it all. For more information, including directions and weather closures, go to www.ncparks.gov/Visit/parks/raro/main.php

I remember the forecast for the day was cooler and breezy. NOT! I can still feel the heat and humidity of the afternoon. Spring is only a few weeks away. Who know what adventures are yet to be sought...

That wall of water did make for a tough hike. But I'm ready to go back, aren't you?