Though we had another destination in mind for this week's outing, we canceled all plans when we decided to check out Bogue Banks on NC's Crystal Coast.

Twenty miles long, Bogue Bank is a pencil of an island south of Croatan National Forest. As a barrier island, its job is to protect the raggedy NC coast from Morehead City to the White Oak River Basin, but as it turns out, it's a great outdoor destination. 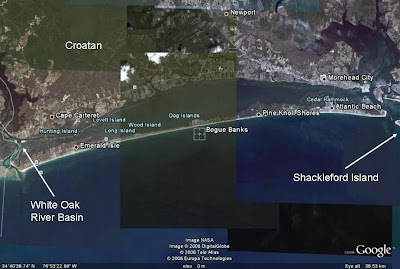 From the mainland, we crossed the B. Cameron Langston Bridge (Hwy 58) near Cape Carteret, and immediately went to the Bogue Inlet Fishing Pier located on Bogue Inlet Dr in Emerald Isle. The pier is free if you just want to stroll along and admire the view of roiling turquoise waters skimming brown-sugary sand. If you want to fish, stop at the entrance and check out the fees (link is above.) Restrooms are available in the little store that serves as the entrance, and a restaurant opened during the high season is next door. 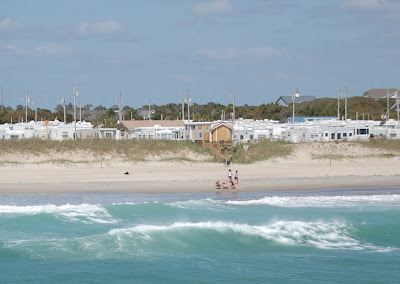 After walking to the observation tower and watching a few people pull in some nice catches, we headed back to the car and resumed our journey.

With large gift shops displaying beach towels and flip-flops in their windows, Emerald Isle appears to be a typical coast town. But it's clean and the main drag is nice and wide. We continued northward on that road toward Indian Beach and Salter Path. These communities are well developed, but according to the author of exploring north carolina's natural areas, which we brought along, the area is a mix of preservation and development. A thick maritime forest and shrub thickets can be seen throughout the island. In some places, homes have been built within the forest. Many times, we saw only the tips of rooftops and breaks in the trees indicating a driveway exists there.

We drove past those cities toward Pine Knolls, home of the North Carolina Aquarium. We didn't visit on this occasion, but it's on our short list of places to go. Also in Pine Knolls at the aquarium: the Theodore Roosevelt State Natural Area and Nature Trails. According to exploring, the Alice Hoffman Trail is less than a mile and is accessible from inside the aquarium. The second trail, the Theodore Roosevelt Trail is over a mile. Again, we've not explored these yet, so check operating hours by clicking here or call the park office at (252) 726-3775. Also, check accessibility before you take small children, strollers, or wheelchairs. Since this is part of the aquarium, I expect one has to pay an admission fee to enter the trails. An attempt to call during this writing failed--the office is apparently closed on Saturdays, so call in advance. I'll update this post as soon as I confirm the information.

Also in Pine Knolls, the Hoop Pole Creek Nature Trail, which winds through maritime forest and marshes. The book states the trailhead is across the street from Hardees. It is, but it's across the small side street, not the main thoroughfare.

I was hungry by this time, but low season has begun along the NC coast which means many of the restaurants are closed, at least during lunch. Fortunately, the 4 Corners Diner, located at 100 E Fort Macon Road in Atlantic Beach, was open. I'm fairly picky when it comes to restaurants, and though the interior has a diner look to it, it's clean, has plenty of seating, and has good food for a decent price. I ordered a crab cake sandwich with a side of fries and a badly needed iced-tea, and my husband ordered breakfast, which is served all day. This will be a return stop on our next visit. Many thanks to them for allowing me to charge my camera battery while we ate (without my mentioning I planned to include them in this report!)

I should mention the fact that we saw beach access in various places along the highway. Emerald Isle isn't the only spot on the island to enjoy the beach experience.

Our last stop on this journey was a place I learned about shortly before we began our trip: Fort Macon State Park, located at the northern tip of Bogue Banks. We were shocked to see that Fort Macon really is a fort, and a rather sturdy one at that. Barely visible from the road, the old pentagon structure built in 1826 is below ground and has quite a history. I found the following on the North Carolina Division of Parks site:

Construction of the present fort began in 1826. The fort was garrisoned in 1834. In the 1840s, a system of erosion control was initially engineered by Robert E. Lee...At the beginning of the Civil War, North Carolina seized the fort from Union forces. The fort was later attacked in 1862, and it fell back into Union hands. For the duration of the war, the fort was a coaling station for navy ships.

More rich history occurred after that time but eventually, the old fort was later abandoned, and then restored. For more information, go to the NC Parks site at www.ncparks.gov/Visit/parks/foma/history.php

Since it is on the tip of the island, Fort Macon has a beach, a pavilion, and a view of nearby Shackleford Island and Morehead City. It's a great place to picnic, fish, stroll along the beach and watch gulls and other coastal birds. One disadvantage: construction is currently in progress. The fences and equipment are unsightly but fortunately, they're not visible from the beach.
Surprisingly diverse when it comes to outdoor activities, Bogue Banks is a great day or weekend destination for eastern North Carolinians and visitors to these shores. For more information, go to http://www.boguebanks.com/

Ah, my old stomping grounds as a teenager when we wanted to go "to town." And, of course, we skipped school to go to Atlantic Beach, but please don't tell my mother. Ha!

I haven't been to Atlantic Beach in about two years, but I heard there are plans to revitalize "The Circle." I don't know, though. Did you notice any new construction around AB?

You're so right. Emerald Isle is a lovely beach. Very family friendly. There's a nice place to rent kayaks to play around the sound side. I love your posts, as always! Thanks for the work you do.

Thanks, Julie, but believe me, it's my pleasure!

I didn't notice any construction in AB, but I'm notorious for ignoring everything but what's directly in front of my eyes :o) However, I've not heard of The Circle so we didn't check it out. One thing sorely missing from my reports is local flavor (ie the area around Davis is called Downeast?) As we've seen in your work, those details help bring an area to life.

I'll try to check out The Circle the next time we're down there. Thanks for the info and for stopping by!

Oh, yes. It's the original Down East! Sorry to be a know-it-all. I'm just so homesick! Your posts are beautiful, and I look forward to each new one (and I have fun reading the ones I missed, too). Have a good day!

Goodness, I don't view you as a know-it-all. I appreciate your input because I don't know a great deal. I can visit these places as a tourist, but because I wasn't reared in the area--not to mention the fact I've lived here less than a year--I'm missing the secret ingredients that make the dish savory.

Sorry about the homesickness. I understand! Gosh, I don't know if this blog is helping or making things worse. Glad you're enjoying it, though. If you read the Pearson Falls post, go back and read it again. Last night I combined the two posts, revised the entire thing, and fixed (hopefully) the video link. Enjoy!