Update June 28, 2013: While updating this post, I checked the Karen Beasley Sea Turtle website and discovered the hospital is closed for tours while they prepare to move to their new, larger facilities.The original post (below) still conveys the tireless efforts of those dedicated to saving these gentle creatures.

A handful of ladies, a few summer interns, and an ocean of dedication have saved over 200 endangered sea turtles since the hospital opened in 1997. Though sixteen turtles were released this past Tuesday (at the time of this writing) fourteen still remain at the hospital. One, a loggerhead whose skull had been split. Another, a green turtle that injured a flipper in an encounter with a boat propeller. Yet another, a turtle named Lennie who went blind after getting struck by a blunt object. Though hospital workers will return his fellow patients to the water this fall, Lennie can no longer care for himself and must stay. He's a Kemp's Ridley, the number one endangered sea turtle.

Everyone associated with the hospital--from the people who patrol the beach each morning searching for turtle nests and report their findings, to the workers at the hospital, and those who help haul these 200+ pound turtles to the sea for a release--are volunteers. Astounding considering the time and physical demands of their job. During our visit, at least ten people were on duty to give the steady line of visitors a tour of the turtles currently residing in tubs in a room the size of a one-and-a-half car garage. They receive no compensation for this and the tours are free. They ask only for a donation. They also offer attractive logo items in their gift store, the proceeds of which go back to the turtle hospital.

There are currently nine sea turtle nests on Topsail Beach. Nine. All are most likely Loggerhead nests and probably contain about a hundred eggs. Only a few of these turtles will grow to adulthood. If they do, the females will begin returning in about twenty years to lay their own eggs. Unfortunately, boaters and other Samaritans may bring a few of them home before that for treatment for illnesses or injuries.

For more information about the Karen Beasley Sea Turtle hospital including news about the mass release and a chance to watch a patient via the turtle cam, go to www.seaturtlehospital.org/.

For more information about the turtle hospital located at the South Carolina Aquarium, go to www.scaquarium.org/seaturtle/rescue.aspx

And while you're at Topsail, go to the beach. 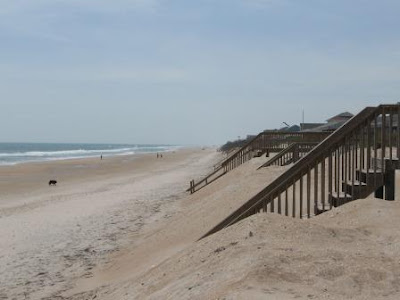 An interesting post. It sounds like quite a place! Thank you for the links. I will check them out.