Thus I began my short story, "Saints and Sinners", which I set in Bath, North Carolina. Like my characters, we learned that much and more during our visit to the state's oldest town.

Historic Bath, as it's called, is located on the southern portion of the Ablemarle-Pamlico peninsula, between the Albemarle and Pamlico Sounds. We'd looked forward to exploring this area, especially after visiting New Bern and Edenton. Because the three towns are often grouped together as being the oldest in NC, we had some expectations before we arrived. Consequently, we were surprised.

Where Edenton and New Bern are home to streets lined with fabulous examples of architecture, Bath resembles a friendly residential neighborhood, not a once bustling port town or home to the notorious pirate, Blackbeard. 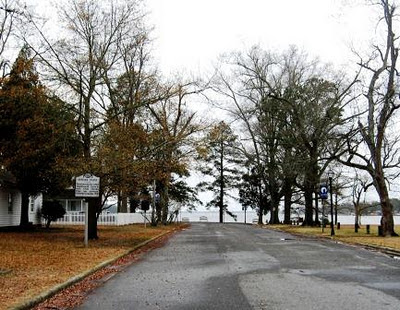 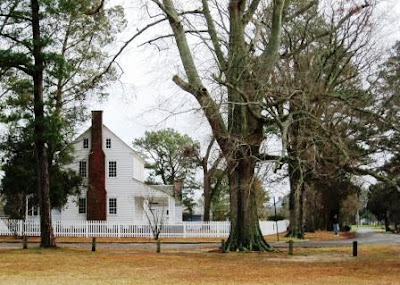 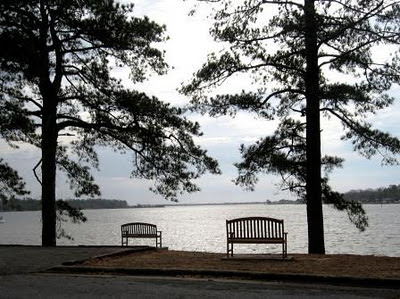 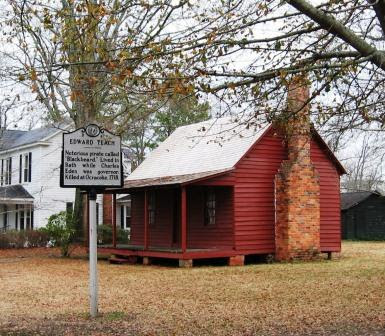 And the first town in North Carolina to have been cursed by George Whitefield. As the story goes, residents, who decades before had hosted Blackbeard, kicked the great evangelist out of town. Read Whitefield's response here: www.nchistoricsites.org/bath/legends-whitefield.htm

Delana pointed to a one-room brick church in the midst of a cemetery. A carpet of leaves, dry and brittle from lack of nutrients, coated the ground. Several lifted on a gust of wind and swirled above the heads of concrete angels praying over weathered headstones tilting in the soil. --Saints and Sinners

We walked around the quiet streets for a while, admiring the view of Bath Creek, historic houses and churches, and the cemetery at St Thomas Episcopal Church. The little church has a history of its own, dating back to 1734: www.nchistoricsites.org/bath/st-thomas.htm 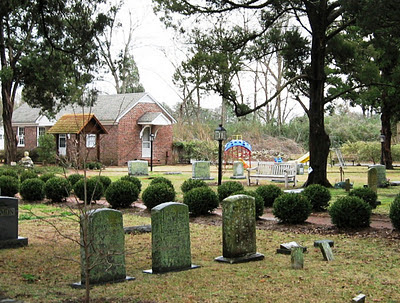 And then, like my characters, we left Bath, but not the memory of this charming little hamlet.

Together, we walked outside where cherubs bowed their heads in silent prayer. Water from a pillow of cloud above us saturated the air. I inhaled the refreshing scent, and leaving Bath, I finally felt clean. - Saints and Sinners

An interesting, and informative excursion. While we're discovering much of what eastern North Carolina has to offer, we're learning there's more to see than we had anticipated.

*For more information on Bath, go to
www.ah.dcr.state.nc.us/sections/hs/bath/bath.htm