Vocabulary for this report:

Our time in Eastern North Carolina is proving to be both interesting and informative. While our previous outings introduced us to ENC's history and charm, our latest outing flat out challenged us to learn about the unique environment existing along the state's renowned coastline.

Though we've traveled to the aoutheast portion of ENC twice since our arrival, we've yet to adequately explore much of what this region has to offer. Since the roads and restaurants are fast becoming familiar to us, we decided to get a cursory glance of additional interests before moving northward, so we traveled to Croatan National Forest, situated on 150,000 acres between the Neuse, Trent, and White Oak Rivers.

Most of my information about Croatan comes from my exploring north carolina's natural areas, book. Descriptions of wetlands, swamps, natural ponds and lakes, estuaries, a maritime forest, carnivorous plants, and boardwalks over salt marshes captivated me. I wanted to see it all, but with our short Saturday schedule and a three-hour (round-trip) drive, I had to settle for just two destinations. Our first stop: Great Lake.
IMPORTANT NOTE: taking a small car with low clearance and no four-wheel drive to Great Lake is a big mistake. But I'll get to that in a minute.

I am The Navigator, and with a good map in hand, I usually do a pretty good job of it. I know even-numbered Interstates and highways indicate the road travels east to west, and odd number goes north to south. I know Interstate exit signs usually correlate to exit numbers (not in all states, but most) and I know it's a good idea to familiarize oneself with the legend on a map to differentiate between two-lane roads and state highways. When I had consulted my worn atlas and didn't find any roads through the forest, I went online. What I missed when I printed the map I found on the NCNatural website was the fact that the "roads" on the map were a faint gray. The legend didn't mention it, so I didn't think about it. Mistake.
There's a reason why the road is faint gray. The road IS gray. Highway or NC or whatever 1100, which cuts through Croatan Forest is unimproved, but it was paradise compared to the rutted sand dune we had to travel over to Great Lake. Watch Video If I ever get the dings from the gravel out of my car, I'll have to change the struts. 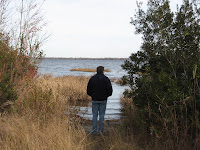 Great Lake is located in the middle of the forest and is a shocking surprise. I'm still trying to get a handle on whether it's a Pocosin lake or if water from pocosins drain into Great Lake. Either way, it was breathtaking. The view from the very secluded parking lot showed waves blowing across a beautiful deep, dark blue lake, like the deep waters of the sea. It was the sapphire in a rock, the diamond in coal, and totally inaccessible without a boat.

We considered walking around the lake in search of a clearing, but Croatan Forest is open to hunters, and this time of year, we passed plenty on the way in. I wore colors that would distinguish me from a deer or a bear in the woods, but why take the chance? So we enjoyed what we could see of the lake, and went to our next destination, Cedar Point Tideland Trail.

The 1.5-mile Cedar Point trail snakes around the White Oak River estuary. I'd read about this area while doing research on salt marshes and was pleased to see it in person. I'm still not sure if both salt- and freshwater marshes are present; I'm still trying to figure out how to tell the difference between the two (other than location. Surely the grass isn't the same in both.)

Unfortunately, Cedar Point was also difficult to find. Since my exploring north carolina book takes explorers on different tours, directions begin from the previous stop, which is Whitehouse Forks Road. And of course, that road isn't well marked. The directions provided on the website where I found the map say, "It can be found by following the (boat ramp) signs on NC Hwy 58, north of it's junction with NC Hwy 24." That would work if NC posted signs for the boat ramp.
So…Kimberli's directions to Cedar Point Tideland Trail: From Hwy 24, travel approximately one mile north on Hwy 58. Turn left on VFW Road. Go straight until you see the parking lot.

Cedar Point trail is a delightful, easy walk and very picturesque. We walked on a dirt trail through a pine-hardwood forest (so says my book) and on boardwalks over the marshes. We saw a white crane and a Blue Heron. The sun shone on the waters of the White Oak River and it was one of those great coastal moments that make the hassle of getting there worth it. I wish we could have stayed longer. 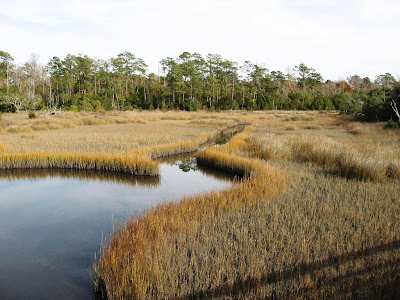 We still have several destinations to visit in Croatan such as Patsy Pond Natural Area and Nature Trail, Haywood Landing at White Oak River, the Island Creek Forest Walk, and more.