Tucked away in the flat lands of the South Carolina Lowcountry, north of the coast and east of the bustle of civilization, down a two-lane road bordered by pines and oaks interspersed with sweet-smelling mimosas is a piece of land that was once part of the golden era of rice. The rice is gone now, with the exception of two-pound bags sold in the gift shop, and the fields once drained during low tide is a swamp. Change brought about by an era gone by, mismanagement, and hurricanes. What once was Dean Hall Plantation, settled in 1725 and named for a town in Scotland, is now a off-the-beaten-attraction known as Cypress Gardens.

We arrived forty-five minutes after the park opened and fifteen minutes before a guided tour of the swamp would begin. Having been told it was the best tour of the day, we held our ground like good little southerners and waited on the dock. Time not wasted. As we chatted with our guide--a young man who grew up in the area, and who gave us bits of information about the park and nearby Cooper River--we watched an otter hike down the nature trail and a smiling bride float on the swamp in a rowboat.

A twisted, but interesting start to our day. 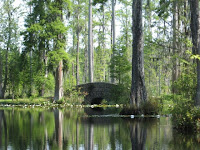 We had the option of taking a rowboat and touring the swamp ourselves, but we wanted to hear the stories. Soon, we joined six others in a boat made of cypress, and as we glided over the black waters, we listened to stories of Dean Hall and its evolution into Cypress Gardens. Our guide explained how the gate system that once flooded the rice fields worked, and why the swamp was black (the water is clear, but tinted from tannic acid from the leaves of cypress trees. Much like a cup of hot tea.) He showed us crumbling, yet picturesque pillars and a bridge over still waters--scenery left from the filming of The Patriot. He also pointed out five alligators, a turtle sunning itself on a branch, carnivorous yellow bladderworts, stunning lily pads in bloom, and a swarm of honeybees plastered to a tree.

During the tour, I wondered aloud why we had yet to suffer one mosquito bite despite floating along in what should have been stagnant waters. Our guide explained the swamp is a balanced ecosystem. Cypress trees growing in the swamp produce an oily substance that covers the surface of the water, trapping any mosquito larvae that is laid there. An abundance of alligator gar, bass, and what the bride called "big daddy catfish" then eat the eggs. I felt a pang of disappointment when the tour ended. It alone was worth the price of admission.

After the boat tour, we investigated the butterfly house, a twenty-five by twenty or so room filled with colorful flowers and even more colorful butterflies. We spent about fifteen minutes inside, watching gorgeous bugs that didn't make me scream flutter about, while others broke free of their cocoon. Then we decided to check out Crocodile Isle, an attraction Cypress Gardens has since had to close due to budget constraints.

Cypress Gardens also has a small aquarium. The South Carolina Aquarium was next on our list, so on this visit, we did a quick walk through. We intend to return, though, and we'll spend more time at this attraction.

Next, we headed toward the nature trail where we'd spotted the otter earlier that morning. The trail is short--only 4.5 miles--and like the Lowcountry, flat and worth the time we took to explore it. We passed a charming wedding gazebo where the catfish-loving bride would soon be married, an abundance of day lilies, and pitcher plants growing in a field. Photos from our visit:


A great day in the South Carolina Lowcountry. For more information on Cypress Gardens, go to www.cypressgardens.info/

I just wanted to comment on how nice your blog was about Cypress Gardens. I am the Curator of Birds and Fishes at the Gardens, and we are always appreciative of anyone who leaves comments on the park. We are so glad that you enjoyed your day. I was a bit concerned however that you thought the Croc exhibits were too small to house the critters within them. Please be assured that we also worry about this. A call came 2 years ago that a zoo was being closed down in Florida and they were going to have to euthanize all of their animals. We quickly went to work to be able to help them out. We now exhibit 17 of the 23 crocodilian species in the world. We still feel that the space is adequate at this time. It would not be adequate of course for a mammal of those sizes, because there would just not be enough room for the creatures to run around. Crocodiles and other reptiles, however, do not run around. Their whole goal for the day is to bask in the sun, mouth agape, and keep their bellies full. As you could see, none of them were skinny. We love our animals very much and are very concerned for their well being. We are super glad that we often find visitors to our park who are as big of animal lovers as we are. I was also wondering, if after touring the "big" SC aquarium if you were maybe a bit more impressed with our "little" one. We are very proud.

Hi Kelly, and thanks for posting a comment regarding Croc Isle. I'll modify my post to include your note.

And yes, we were impressed with your aquarium. We wanted to spend more time there, but rushed through because our scheduled was filled for the day. Overall, we had a fantastic time at Cypress Gardens, so much so that I recommended the park to the 100+ members of my hiking group on my return. Several members mentioned a desire to visit. We're also looking forward to visiting the park again to explore those places we had to miss the first time around--and to spend more time in the aquarium :o)

Kimberli, I found your blog very informative and appreciatte all the info about the swamp and the other attractions Cypress Gardens has to offer,as we are going today for a visit,(my boyfriend and I). This will be my 2nd time going, the 1st time was back in 1998 so I am excited to see all the changes that have come about since then. Reading your blogs helped a lot, especially the one about the guided swamp tour, when I went the last time we took the boat ourselves due to the fact that we had missed the guided tour at the time , so I am looking forward to doing that part...and the info about the blood sucking bugs was helpful also, I know to take the off just in case now..again thanks a bunch as I enjoyed reading all you the blogs you have written, keep up the good work...Penny..in Summerville, S.C.